Quarters are one of the most collected coin out there. They hold value with silver and they are more affordable than 50 cent pieces and dollar pieces. These coins are fun to collect.

Because of the practice of cutting up the Mexican 8 Reales coin into eight parts (thus the "Pieces of Eight" name), the U.S. quarter is 1/4 of a dollar, became known as "two bits." As a silver coin of substantial size until 1964, the quarter has always been popular - both in circulation and among collectors. Several designs have been used since 1796, and many collectors try to assemble at least one coin of each type.

The Draped Bust Quarter was the first quarter dollar piece ever to be minted, and because of that is very expensive to own one. in fact, one sold at auction for over a million dollars. These are very valuable and scarce! 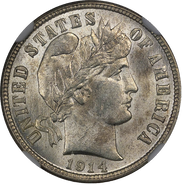 The Barber Coinage consists of Dimes, Quarters, and half dollars all made out of silver! The designer for the Barber quarter was Charles E Barber. By the 1880's there was a increasing call for the replacement of the Seated Liberty Design, used since the 1830's on most denominations of silver coins. The Barber Quarter lasted until 1916 when all of the Barber designs changed. The Dime went to the Mercury Dime, the quarter changed to the Standing Liberty and the half dollar changed to the Walking Liberty. (The 1916-D walking liberty is a key date with only 1,014,400 minted!)

Shop
Home Page
Back to Denomination